From chess and photography to streaming

I learned to play chess at the age of six and reached Woman FIDE Master level before stepping away from competitive chess at 17, to focus instead on my interest in programming and mathematics, reading for a Masters degree in IT and starting an MBA at Moscow City Business School – but still translating and proofreading chess articles throughout this time, including one year work for “64” magazine, alongside with Alexander Roshal.

Among my highest chess achievements are 1st place in Yekaterinburg's Women Rapid Championship and best in girls under 16 of Sverdlovsk region.

Woman FIDE Master at the age of 16

Picturing the elite chess events across the world since 2010

Returned to chess as a photographer and journalist, completing a diploma in Photojournalism at Moscow State University, writing a thesis on Digital Manipulation and Ethics in Modern Photojournalism. For almost a decade, my photographs have been published in all the leading online and periodical chess magazines and newspapers. I had exhibitions at the Sochi 2014 World Championship, the Baku 2016 Olympiad, Tata Steel Tournament 2017,  and Poland vs the World match in Wroclaw 2019.

In 2018, I won the Chess Journalist’s Award for Best Chess Photojournalism and in 2019 got an honorable mention. Now I work for the largest chess website, Chess.com, providing them with regular visual content and handle Russian social media marketing. I was also involved in organising the Qatar Masters Open, Tata Steel India, the Chess.com Isle of Man International, Sharjah Women Grand Prix and FIDE Chess.com Grand Swiss International.

A DECADE OF CHESS PHOTOGRAPHY Living off freelancing as a chess photographer is not easy.

Blitz Battle with commentary  together with GM Vladimir Dobrov

First to 10 wins (draws do not count), with a time control of 3 minutes and 2 seconds increment, - we can expect an epic battle of the true chess queens.

I am so incredibly grateful to my community for helping me to do something good for the doctors in the UK!

Here is the report on the Marathon on Chess.com

I had a great fun commentating the games of the Play for Russia event, and it was such a pleasure to have the legendary GM Vladimir Kramnik on stream, with all my viewers joining with questions and donations! We had more than 3000 concurrent viewers!

40,000 Rubles for Russian Doctors / Play for Russia event on Lichess with participation of Kramnik 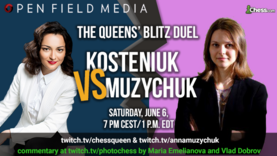 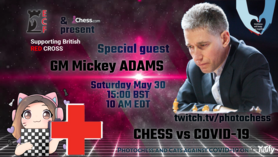 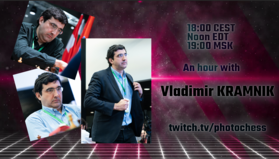